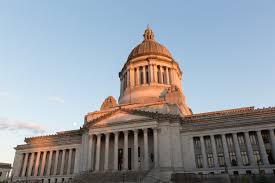 It is gratifying that we're seeing the fruits of the conversations with the legislators during and after the "Winning Universal Health Care: Federal, State, & Local Action"  forum January 26, 2019.

We  support these companion bills that address the hardships people are facing now until we get federal cooperation for single payer Universal Health Care and establish the infrastructure for universal health care in Washington state:
hcfa
HCFA-WA supports The Pathway to Universal Health Care (HB 1877/SB 5822), prime sponsored by Representative Nicole Macri (43rd LD)  and Senator Emily Randall (26th LD). The bill would set up a Work Group to make recommendations for publicly funded, privately delivered health care for all Washington state residents. In the meantime, the bill would evaluate efforts to improve coverage and access through a public option and standardized benefit plan. We will be lobbying for two amendments: 1) to include the phrase "publicly administered," and 2) to require that the Working Group include health care advocates.

These bills were recently submitted and we hope for a hearing in the Senate Health & Long-term Care Committee. We think these bills will see the strongest movement toward single-payer this session.

>>>> What you can do: Let your legislators know you support the HB 1877 and SB 5822  bills with amendments that require the plans to be publicly administered and that health care advocates are included in the Working Group. We want hearings on these bills before the bill cutoff.  It is vital Washington do all it can now to be ready to transition to Universal Health Care when the federal State-Based Universal Health Care Act is passed in Congress, hopefully in 2021.
hcfa
Watch for an Action Alert to pack the hearing and shower the Committee with emails and calls.
hcfa

Our ultimate goal is a single payer, universal health care system in the US -- and until then, a single payer system in Washington state. We strongly support two bills.  Legislators can choose which works best for them -- one with proposed financing and one without financing.

HCFA-WA is not taking a position on HB 1523/SB 5526  - It would increase the availability of quality, affordable private health coverage in the individual market. The bill is prime-sponsored by Rep. Cody (34th LD) in the House and Sen. Frockt (46th LD) in the Senate and was endorsed by the Governor. For HCFA-WA to support this bill, it would need to 1) create a true public option run by the Washington Health Care Authority and 2) include a Work Group to dialogue with health care providers on reimbursement rates and best practices.