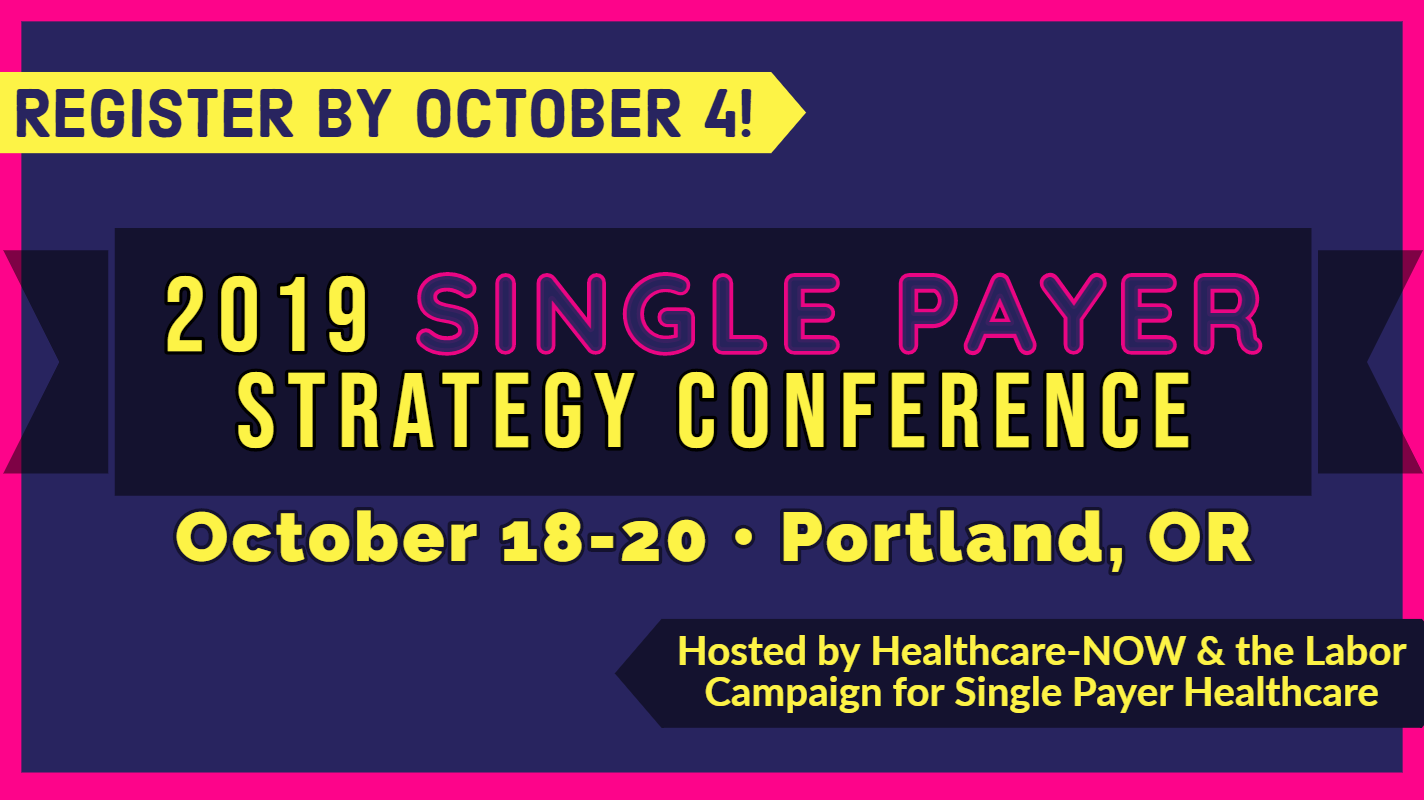 Registration ends Friday October 4 for the 2019 Single Payer Strategy Conference in Portland, Oregon!  The conference runs from Friday, October 18 through Sunday October 20. Last year's conference in Minneapolis was the kickoff platform for the national barnstorm week of action, which launched over 1,000 organizing actions for the new Medicare for All bill in the House.

A note about the broad Labor support for Medicare for All, sent out earlier this year by the conference co-host, Labor Campaign for Single Payer.

This conference could not come at a more critical moment in the decades-long crusade to make healthcare a right for everyone in America. Majorities of the American people now support Medicare for All and 19 unions representing nearly 10 million members have stepped up to endorse HR 1384 The Medicare for All Act which received its first House hearing on April 30. Five Democratic presidential candidates are cosponsors of the Senate Medicare for All Bill--S 1129 and a number of states are poised to enact single-payer style legislation -- Mark Dudzic, National Coordinator, Labor Campaign for Single Payer

At the 2019 strategy conference, there will also be discussion of the federal State Based Universal Health Care Act, soon to be reintroduced in Congress by Rep. Ro Khanna (CA), following on Rep. Jayapal's HR 6097 (2018). This is the proposal that would give states which are politically ready to achieve universal health care the needed federal support while we continue to build the movement for a national health plan.

Healthcare-NOW and the Labor Campaign for Single Payer Healthcare invite you to join hundreds of activists for a weekend of inspiration and strategy to win single-payer national healthcare! Our social movement has grown rapidly during the Trump era, and this year we've won historic advances in the House of Representatives. At the same time, the healthcare industry has launched a well-funded opposition campaign. This year's conference will highlight effective strategies and tactics from across the country, and make sure we continue to grow our movement through a crucial 2020 and beyond.

When & Where:
The conference will be held at two locations in Downtown Portland the weekend of October 18-20:

Friday & Saturday the conference will take place at The Eliot Center.

Sunday the conference will take place at The Benson Hotel at 309 SW Broadway, a 10-minute walk from the other venue.

Accommodations:
The organizers have reserved a block of discounted rooms at The Benston Hotel at $175 per night. You can book a room with one king-sized bed or two double beds at this rate, and the special rate can be applied for up to 2 days before and after the conference if you wish to extend your stay. The cut-off date for getting the group rate is Friday, October 4, but rooms in the reserved block  are limited and may run out prior to October 4th! If you need solidarity housing, the organizers will try to find a place for you with a local activist. The cut-off date for applying for solidarity housing is October 4th.

Visit Healthcare Now's site for all the info.