Letter to the Editor: Our health-care system is failing Americans

Letters to the Editor are an important advocacy tool. They are quick to write and are one of the most widely read sections in the newspaper. Many politicians and government agencies routinely clip and circulate letters to the editor as indicators of what is important to their constituents.

Below is a letter to the Seattle Times published February 1, 2019, urging Americans to go beyond stopgap measures. We hope it inspires you to write a letter to the editor to your local paper.

Updated February 16th with a letter that was submitted, but not published. Ken is on a roll!

You can watch the entire forum below.

In this blog, former RN and longtime HCFA-WA supporter Cris Currie addresses a common concern. Once upon a time, from the 1930s through most of the 1960s, the phrase “good enough for government work” was meant as a compliment for a job really well done. Its meaning is much different today, and far too many potential supporters of Medicare for All have no confidence in government work and do not want the government to be involved in their healthcare. How should single-payer activists respond to this concern?

There are several state healthcare bills in the hopper for the 2019 legislature to consider — including the Cascade Care bill Governor Inslee announced this week. We are steadfast in supporting much-needed temporary relief from the high cost of insurance and healthcare, but it must be a bridge to a sustainable, publicly administered and funded system.

That it has received early press coverage means that we need to continue to advocate for true health care reform: HR 676 at the Federal level and WHST-like plans for Washington state. Keep up the noise for a true singlepayer system!

Watch for periodic action alerts and updates from HCFA-WA as the Legislative Session unfolds.

For information on the Cascade Care bill, we recommend this article from The Stranger.

The very first hurdle for our new bills will be passing them out of their respective Healthcare Committees. It is imperative to convince these legislators to support our bills and amendments.

If you are a committee member's constituent, your contacts with your legislator are supersized. Your calls, emails, letters and bill comments are vital! To find your legislative district, go here and enter your address.

Thanks to Washington voters, there will be a lot of pressure on the state legislature to deliver a path to single payer universal health care in the 2019 Legislative Session.

Here's what happened in the historic, high turnout  2018 Midterm Election:

Thank you for the successful 2018 HCFA-WA Annual Meeting! We had an excited and enthusiastic gathering of activists wanting to learn more about our plans for the 2019 Legislative Session. A recap...
Read more
Posted by Sydnie Jones December 08, 2018 7:20 PM
Share
Add your reaction

Congratulations to our Health Care Champions! 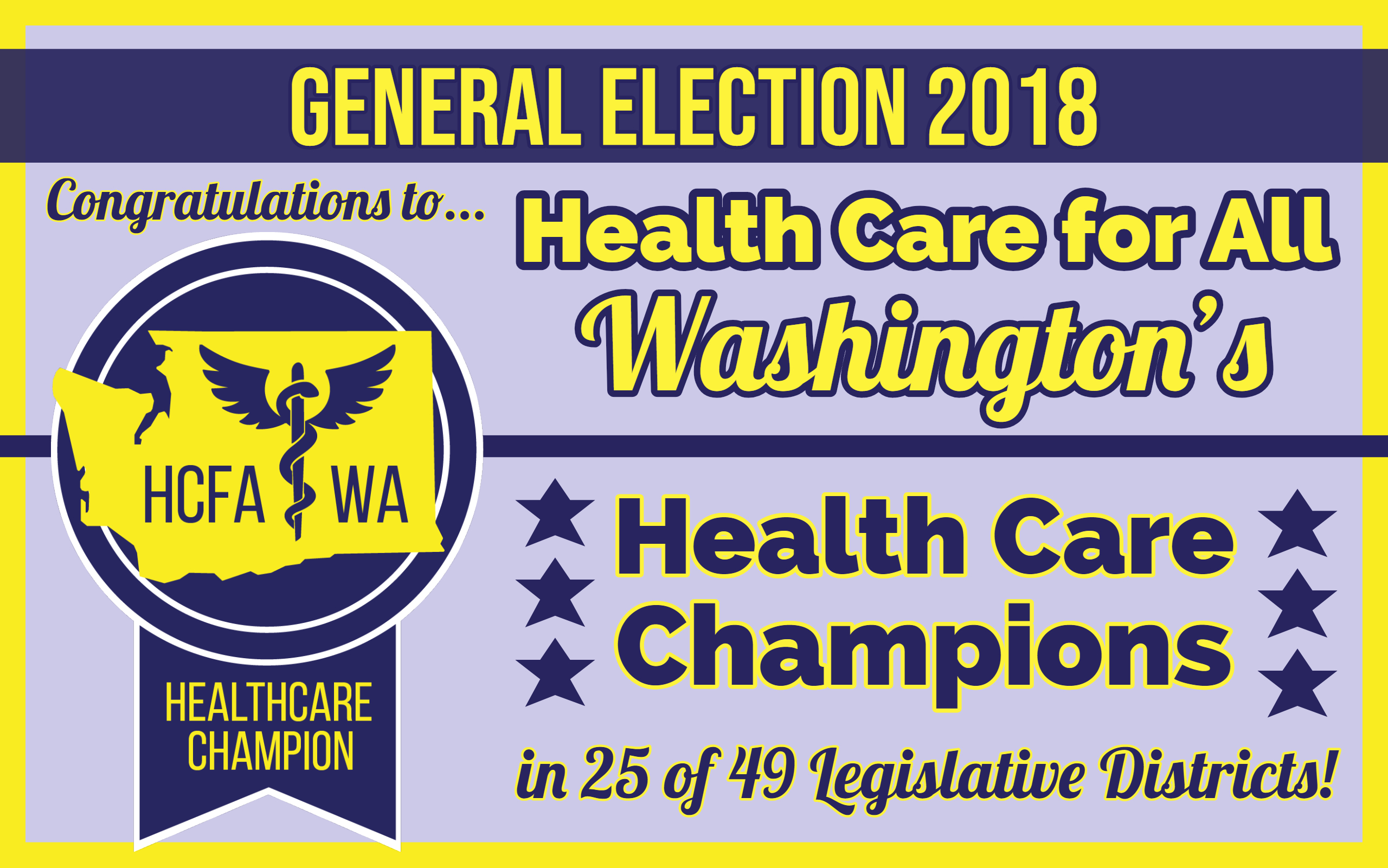 We gained six new Legislative Districts with at least one legislator supporting single payer healthcare reform in the 2018 General Election!

How We Can GET THERE...from Here

We face some challenges and exciting opportunities as we head into the 2019 Washington State Legislature to fight for state-based single payer, universal health care.