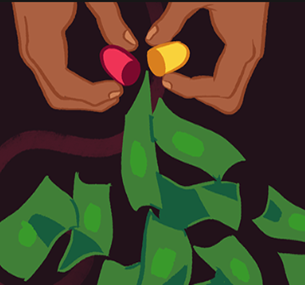 This issue we focus on why healthcare is so expensive in the USA. We have 5 takeaways from our 2nd Wednesday Speaker Series Controlling Health Care Costs in Washington State, as well as an analysis of how health insurance companies profit from your care.

We follow with links to podcasts and articles so we all have the tools we need to effectively advocate for policies to regulate our health industrial complex.

We  are excited to introduce a new digital tool “Take Action Network” which allows you to follow health care legislation in Olympia!

Finally, we would like to thank all of our supporters in GiveBIG. Without you, we would not be able to do the work we do! 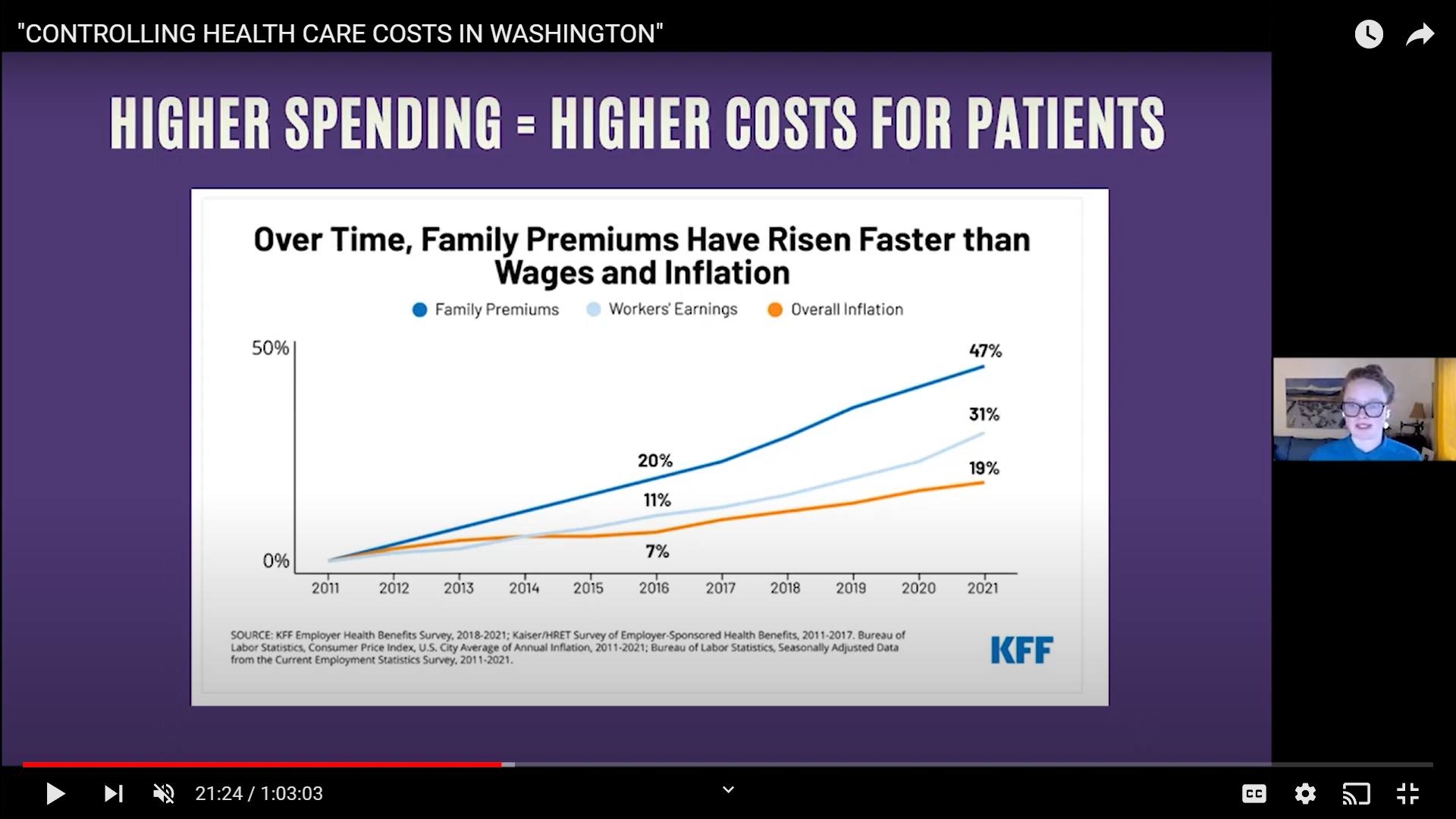 As mentioned above HCFA-WA 2nd Wednesday Speakers Series focused on Controlling Health Care Costs in Washington State with a presentation by Sam Hatzenbeler, Health Policy Associate with the Economic Opportunity Institute. Here are the main takeaways:

Fun facts about consolidation in our state:

While fighting for universal health care states can limit the medical industrial complex and regulate imbalanced markets with the following recommendations.

Problem of price control in our state:

Cascade Care Select has a reimbursement rate cap of 160% of Medicare but has limited effectiveness as it was unable to enforce hospital participation until Senate Bill 5377 in 2021.

Problem of transparency in our state:

Washington’s Health Care Cost Transparency Board has the authority to identify cost trends, set benchmarks and develop recommendations for reducing health care spending. However its effectiveness is hindered by no mechanism for enforcement.

A further barrier is the State run All Payer Claims Database (APCD) has been prohibited from requiring self-insured and private employer health plans to submit data to the State. This represents about 30% of all coverage. APCD data is reported directly by insurers to States, usually as part of a State mandate.

The Oregon Health Authority implemented accountability mechanisms for providers and insurers whose cost remains high. If cost-growth targets are exceeded insurers and providers could receive a financial penalty.

Problem of Antitrust enforcement in our state:

The Consumer Protection Act of 1961 created guardrails around anti-competitive business practices. Notice of material change law, currently, even though we are only 1 of 5 states in the nation that require 60 days prior notice of all mergers and acquisitions to the Attorney General office, there is only a $200 daily penalty for non-compliance.

Massachusetts has established a tri-agency approach: The Health Policy Commission, The Center for Health Information and Analysis and the Office of the Attorney General. These three agencies support reviews of mergers and  acquisitions between healthcare entities and can:

Important Note: Healthcare entities are required to pay for the monitoring!

Problem of drug affordability in our state:

They have significant behind-the-scenes impact in determining total drug costs for insurers, shaping patients’ access to medications, and determining how much pharmacies are paid. They receive manufacturer rebates, discounts that drug companies can give to encourage the use of more expensive brand name drugs rather than generics. Yet they are not legally required to pass along those savings to the state, health insurance plans or enrollees enabling them to accrue massive profits.

Washington has tried to regulate with three laws

Even though these are important parts of regulating and improving drug affordability, they all lack strong enforcement mechanisms and/or penalties.

In 2018 California passed the PBM bill that:

Senator Emily Randall, a member of the Senate Health & Long Term Care Committee and Aaron Katz, Principal Lecturer Emeritus with the School of Public Health at the University of Washington shared their insights into controlling the cost of health care. You can view all of the evening’s presentations here.

HCFA-WA member Cris Currie has provided this follow-up on how insurance companies bill: 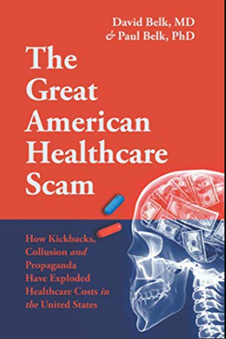 In a nutshell, here is how the current health insurance business model works, as explained by David Belk MD and Paul Belk PhD in The Great American Healthcare Scam. After a period of skyrocketing hospitalizations (many of which were unnecessary) in the 1970s, the end of the 20th century saw a substantial decrease in hospital admissions thanks to several successful governmental reform efforts.  These included Medicare payments by diagnostic group instead of by the number of hospital days and increasing hospital accountability with effective fraud enforcement, as well as drastic cuts for Medicare reimbursements through the Balanced Budget Act of 1997.  Many of these cuts were reversed in later legislation, but the message was clear.  At the same time, admissions were dropping due to significant advances in medical treatments for common conditions formerly requiring hospitalization.  Both hospitals and insurers began to worry about their future viability.  Gradually, overbilling was seen as the answer to this perceived crisis.

Providers now routinely overbill commercial insurance carriers for their services because they never know what any given carrier will decide to pay.  Insurance companies have near complete control over their provider payments, since they create the bill sent to the consumer, and there are no laws that govern prices or that require reporting what was paid.  Generally, they pay whatever the provider bills, up to an unspecified maximum.  Since there is no penalty for overbilling and nobody wants to risk getting short changed, provider bills keep increasing, as payments also increase.  Of course, most providers are very happy when insurers pay more than expected, and this encourages them to ask for more the next time.  Payment chaos deliberately makes it impossible for anyone to determine the actual value of a service.  Transparency is therefore the key to breaking free from the stranglehold of ever rising prices.

When insurers pay less than what is billed, they claim to provide "protection" for consumers in the form of these increasingly sizable "discounts."  They then create the false impression that their services are essential for health care affordability.  There is of course a grain of truth here, but companies frequently deny coverage for individual services, often for very unclear and questionable reasons, and then the consumer is forced to pay the entire, inflated bill less any more modest discount that can be directly negotiated with the provider.  These negotiations are typically difficult for providers because they need to avoid admitting that their prices are inflated and that it is all a game.

The faster prices rise and the more chaotic and complicated the billing gets, the more fearful consumers become.  With heightened fear, more consumers seek insurance protection even as premium increases appear more justified.  The ACA requires insurers to spend at least 80% of their individual market (85% for the group market) premium dollar on healthcare.  The remaining 20% can be used for administrative overhead, including profit.  (Remember, Medicare only spends 2-3% on overhead and is accountable to the public.)  So, whenever premiums are increased (usually only 5-10% annually), company profits also typically increase.  This would not necessarily be the case in any other business, but it works in healthcare because of the uniquely powerful role that insurers play as middlemen between consumers and service providers.  They can not only adjust every payment to their liking and fine tune deductibles and copays to ensure higher profits, they have even tried to redefine what constitutes healthcare for their 80% allocations. 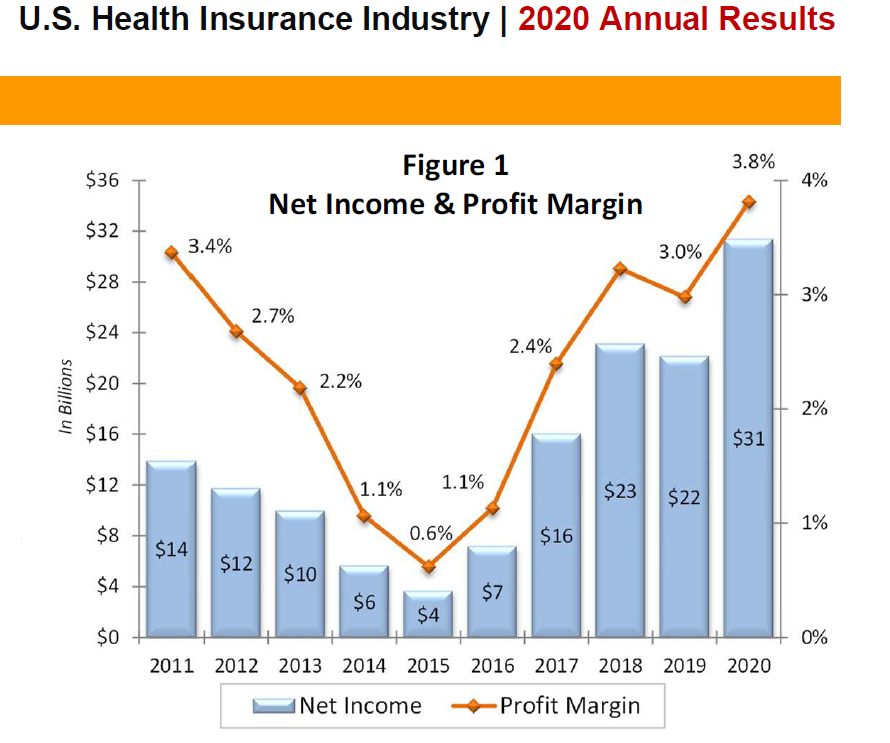 For example, on a $500/month premium, the insurer must pay out $425 for healthcare.  If the premium is increased by 7%, the payout is $454.75.  The revenue is increased by $35 including an increase of $29.75 for expenses which can be used to reward selected providers, plus an increase of $5.25 for overhead, much of which can be reinvested into other assets, typically on Wall Street, for additional revenue.  This is how, between 2003 and 2017, the total revenue for the seven largest for-profit healthcare insurers increased by over four times and stayed consistently on top of rising costs.  So, by fostering higher provider prices, insurers are able to annually raise premiums and their total revenue.

What is even more outrageous is that healthcare consolidation has expanded to the point where most large hospital conglomerates like Kaiser Permanente and Providence Health & Services have their own insurance divisions. The interests of providers and insurers have literally become joined, reinforced by contracts carefully guarded as trade secrets.

Of course, none of this was planned in advance.  It just slowly evolved over time as threats against profits increased.  Health insurance companies figured out how to exploit negative circumstances to their advantage, and they will continue to do so until they are eliminated from the equation by a national single-payer system.

Senator Bernie Sanders formally introduced his 2022 Medicare for All Act to the US Senate!

We know we're in for a fight -- the healthcare industry is already pouring billions of dollars into attack ads and buying our legislators in order to stop Medicare for All from going forward.

Tell the Senate to pass Bernie’s Medicare for All bill!

We are working to enhance our legislative advocacy positions and actions by using the Take Action Network (TAN), a web platform developed by Daniel Weise in cooperation with Washington Indivisible Network.

We invite you to join the Take Action Network.  You'll be provided with an initial profile that will allow you to follow Health Care for All-Washington legislative advocacy work and actions and other organizations working on your issues.  Some of the organizations using TAN are the Faith Action Network (FAN), Environmental Priorities Coalition, RE Sources, Fair Vote Washington, 350.WA, and many more.

In Washington state many people are underinsured:

Therefore cost sharing through copayments, coinsurance, and deductibles disproportionately harms poor folks as they delay or forgo care,  reduce preventive screenings and reduce medication adherence as they can not pay the high deductibles even though they have health insurance!

NPR podcast on the history of health insurance in the US

At one hour, it’s well worth the listen, as it puts our current struggle to fix the American healthcare system into historical perspective.

Just a few of the sobering facts:

GiveBIG 2022 was our most successful ever! Thanks to you, we have almost reached our $20,000 goal. You can make donations directly on our website. Your support and passion for action keeps us going and made this year’s 2022 legislative victories possible.

THANK YOU for everything you do to bring Everybody In, Nobody Out healthcare to all Washingtonians. Together, we will get it done!

If you missed the chance to donate during GiveBIG, it’s not too late!

We still have volunteer opportunities. Polish up your resume with our COMMUNICATIONS TEAM, get political action experience with our POLICY COMMITTEE, help us follow the newly formed Universal Health Care Commission, or jump into FUNDRAISING or OUTREACH. Click this link to volunteer and make a real difference in Washington state.