Have We Started Building Back Better? A PSARA Webinar with Rep. Pramila Jayapal 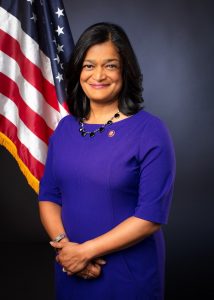 Pramila Jayapal has been a champion for President Biden’s Build Back Better agenda. Join PSARA's webinar on January 25 to discuss what we can do to pursue the progressive policies of the Build Back Better legislation in the face of opposition from Joe Manchin and other conservative corporate Democrats and Republicans.