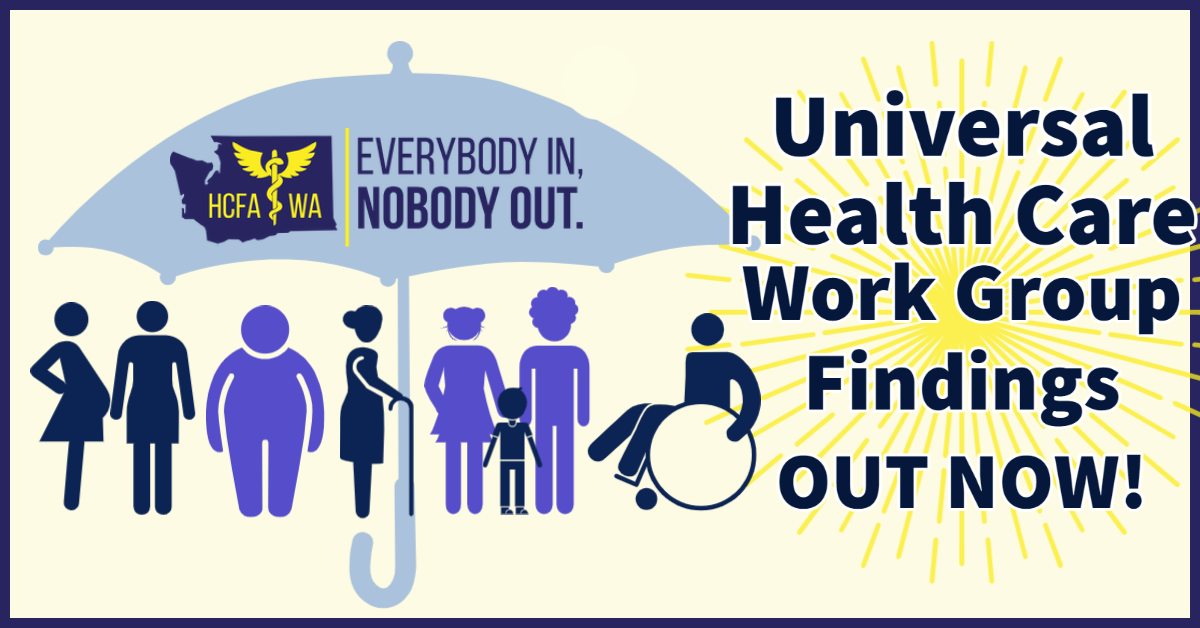 Charged by the Legislature to study and develop recommendations on how to create, implement, maintain, and fund a universal health care system, the 37 members of the UHCWG met 9 times over 16 months (Sept. 2019 – Dec. 2020). Their report was released online by the Health Care Authority on January 15.

The Work Group found that a publicly funded healthcare system best met 6 of the 7 goals established by the Work Group. The actuarial study showed that such a system would save more than $2.4 billion the first year, and $5.6 billion in subsequent years. HCFA-WA President Marcia Stedman noted “This report demonstrates that publicly-funded and publicly-administered healthcare can provide every Washington resident the health care they need when they need it, and also save billions of dollars statewide in healthcare expenses each year once implemented.”

Health Care for All-Washington was instrumental in passing the legislation, ESSB 5822 through the Senate and the House Health Care & Wellness Committee, and funded in the House budget HB 1109. HCFA-WA secured numerous amendments to the bill that strengthened the charge to the Work Group and added important voices: patient advocates, community health advocates, and an individual purchasing family coverage on the Health Benefit Exchange. Other Work Group members included persons with expertise in healthcare financing and delivery, administrators from state agencies such as the Washington Health Care Authority and the Office of the Insurance Commissioner, legislators, and representatives of unions, the health insurance industry and business organizations.

HCFA-WA is introducing legislation to carry forward the recommendations of the Work Group, and we call on the legislature to approve it.

In 2007, HCFA-WA developed the Washington Health Security Trust (WHST) bill. The legislation was revised in 2011 following passage of the Affordable Care Act, which would enable the state to provide fair, simple, and accountable health care financing for all Washington residents using a single health care financing entity; cover a comprehensive package of health services; make health care coverage independent from employment; and more. In 2019, HCFA-WA later helped develop and pass the Pathway to Universal Health Care bill, resulting in the work group noted in this report. HCFA-WA was instrumental in passage of the Cascade Care bill, which created publicly administered health insurance plans available on Washington’s Health Benefit Exchange.

A 501(c)(3) nonprofit with a 501(c)(4) advocacy and lobbying arm, HCFA-WA serves statewide. The majority of HCFA’s Board of Directors are health care providers, including medical doctors in pediatric, family practice, internists and others; pharmacists, psychiatrists, and nurses, with a diverse array of public policy advocates.